i started the game few days ago. I have a match on easy (!) difficulty and play with humans. One of the neighbour systems was caught by a slave raiding party. Now, i still have my hvy crusisers, the AI come over with ONE Battleship with antimatter torpedos, first class point defense and shields. This ship wipes out everything i have so far. On the other sides waits a HUGE army of space harpies. So my game ends here, with no chance of going on.

If this is easy mode, what happens if i try normal? Game over in 30 turns?
Sorry, i am a casual gamer, i want some fun with exploring, i choose easy. I didn't (and want not) expect elite pirates they feel like i go to stop the hun invasion with hundred men. So please, make a easy game easy, not frustating.

Shastar2005 wrote:ONE Battleship with antimatter torpedos, first class point defense and shields. This ship wipes out everything i have so far. On the other sides waits a HUGE army of space harpies. So my game ends here, with no chance of going on

There are of course a lot of galaxy configurations and situations but I assume your are playing on a small galaxy with all default settings at turn 100-150?

First note: Some factions are more difficult to play then others and Humans in particular are the most difficult of them all: even if you get lucky with the random galaxy around you will be fighting for survival for around the first 120 (at default settings)

So if you are looking for a casual challenge, try to avoid Humans. Gremak and Phidi are also more difficult then the others but these can overcome an unlucky galaxy layout and with practice they can be just as effective as the others (unlike Humans)

:
1. AI can still get advanced tech on easy till turn 100 (when colonyzing planet with derelict colony or destroying harpies and gaining research boost) - this will give them one particular advanced tech or help them jump ahead along a particular path. you can basically do the same
2. Concentrate on rapid exploration with Humans: you need to find good planets
3. Reserve valuable planets by building outpost around them - they cannot be colonised this way by others

by zolobolo
You can also take a direct approach in tailoring the experience:
- Setting Raider activity to Low should minimise their interference
- Amount of AIs on map will reduce difficutly in early game (Turns 0-100/150) but increases it at mid to late game (turns 200-300)
- Some factions are more prone to vialance then others: specicially Tinkers and Yoral can be left out if you are looking for a more peacefull experience
- Increasing amount of habitable planets increases handicap for Humans considerably (if you would like to stick with that faction)
- Same for reducing distance between start systems

thanks for the answers. Yeah,i paid my dues. With the humans and Laser tech only, i ve got in a dead end.

I tried another game with the splashy Phidi, and some adjustments in the game settings. While i get contact to other species very late, i had to build my own torpedo destroyer fleet. So, make it short, with this technology i beat everything yet. Better run now

Glad you found a scenario you enjoy

by gaerzi
My first game was easy with Ashdar Imperials. The star gates are such a massive advantage I won relatively easily despite having no idea what I was doing throughout the early game.

Then I did an easy game with humans. Here's how it went.
Spoiler: show 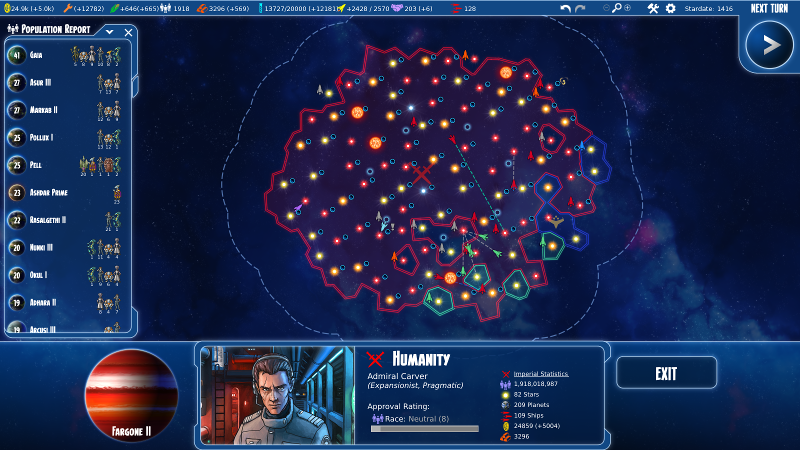 The humans' main advantage is that their ships are cheap. I could build a large fleet quite quickly. You also don't need to build orbital structures to make colony ships, so you can expand quite fast as any colony with 2+ pop can build colony ships.

The main key to the hegemony I achieved in that easy game was putting science labs everywhere. My ships didn't get much in the way of shields and weapons (focusing mostly on long range + point defense, keeping away from the enemy except to capture them), but they were many, and they all had science labs. All planets built space stations with three science labs on them instead of shields. And as soon as I had improved solar panels, I started mass-producing "research outpost transports" which are outpost transports where the fuel depot and the nuclear reactors are both replaced with science labs, and sending them by pair around every gas giant and tiny planet I could find. At the point my last save in that game is in, I have 540 science stations. The result is something like this:
Spoiler: show 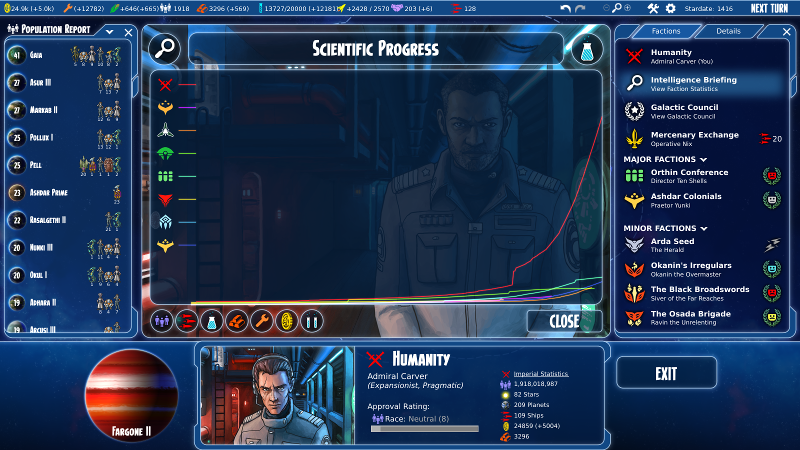 Now I'm in a normal game with the Orthins. It's more challenging, what with not being in easy mode anymore. But the more expensive ships make it harder to pull out the same science station spam strategy.

by zolobolo
Yes Imperials I also find the easiest to play

Ranking in my opinion would look like this from the easiest to the hardest faction:
1. Haduir (Agint Gate and Light Cruiser design)
2. Tinker (no need for food, infinite missile munition to all of their ships which also coutner Harpies perfectly)
3. Orthin (Research bonus, best Cruiser designs in the game and busbars)
4. Ashdar/Yoral (both have production bonus to pops and a strong design Light Cruiser and Torpedo Destroyer)
5. Phidi (Merc buyout right off the bat and fenominal income to boot, they also have the best carriers in the game)
6. Gremak (expensive ships, cloacking is not really useful on combat ships and using slaves get everyone angry at them) Thouhg faction to play for sure and are only outdone by:
7. Humans: Besides having halved upkeep cost in upkoming rebalance everything is against these guys: pops withouth any benefit, weak loadouts, beam weapons, where they have research bonus is the least effective weapon type (except for Ion), no starting colony, penalty to faction relationships

by Backfire_22
Thanks for the advice on races! Of course, as an optimistic idiot, I went for the Humans for my first game bacck in the days and got wiped out, which sort of threw me off for a while

but I recently got into the game again and went for the Tinkers, this no food rule is really making my job easier, even making "zombie hordes" of space pirates easier to handle as you've got a juge logistical spike pulled out of your foot.
All times are UTC
Page 1 of 1
Powered by phpBB® Forum Software © phpBB Limited
https://www.phpbb.com/